The path of the papal way

The journey accomplished in the past by the popes, following their election

The way of the papal way is a fascinating pedestrian itinerary that guides visitors to the discovery of churches and monuments of Rome. It is the path accomplished in the past by the popes following their election and taking possession of Rome as Bishops of the city. The itinerary starts from the Basilica of San Giovanni in Laterano to the Basilica of St. Peter and vice versa, passing through Via dei Santi Quattro, the Colosseum, Via dei Fori Imperiali and the Prison Mamertino. A religious path, without any doubt but with cultural and touristic implications: in fact, it passes through the streets of the city touching points of interest such as the Colosseum, the Fori Imperiali and Piazza Navona, just to name a few.

The first stage of the itinerary is the Basilica of San Giovanni in Laterano, also called the “Mother of all Churches”. Located on the hill of Celio, the basilica is part of a large monumental complex that includes the great obelisk, the Lateran Palace and the Sanctuary of the Scala Santa. Particularly fascinating is its façade, built in 1732 by Alessandro Galilei and prelude to the magnificent interior conceived by Borromini. In the sanctuary adjacent to the basilica are preserved the 28 steps of the so called Holy staircase, which, according to tradition, Jesus ascended the day of his death in the Palace of Pontius Pilate in Jerusalem. The route continues along Via dei Santi Quattro Coronati, where you can admire the relevant Church, whose name derives, according to a tradition, by four martyred soldiers, “crowned” by the laurel of martyrdom; they were judged guilty because they refused to carve the statue of a pagan idol, thus affirming their Christian faith. 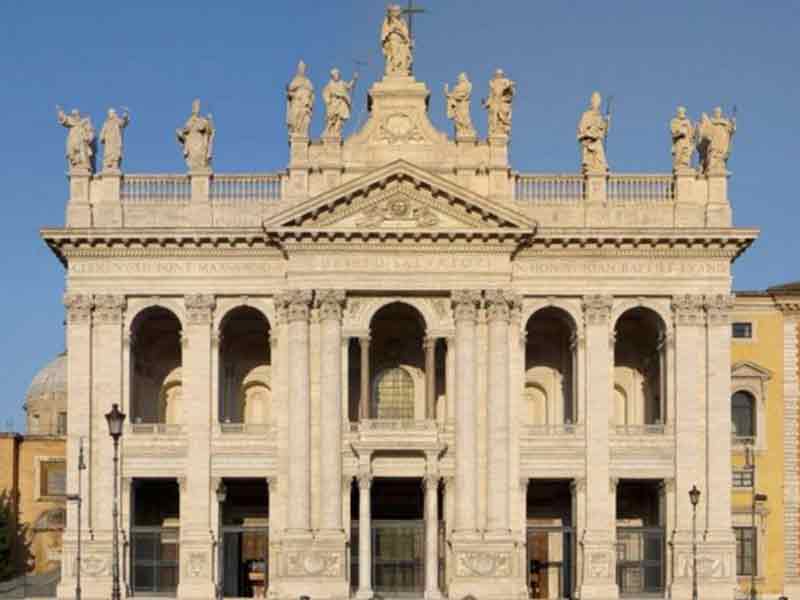 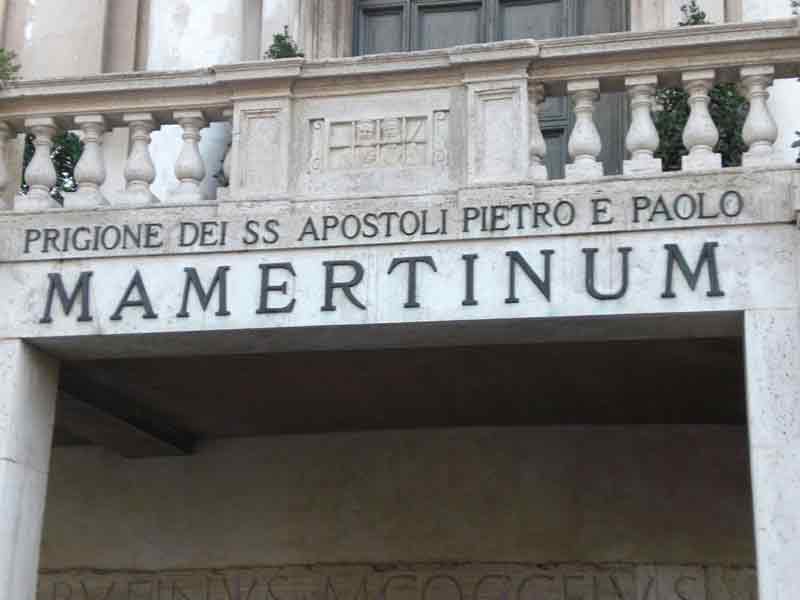 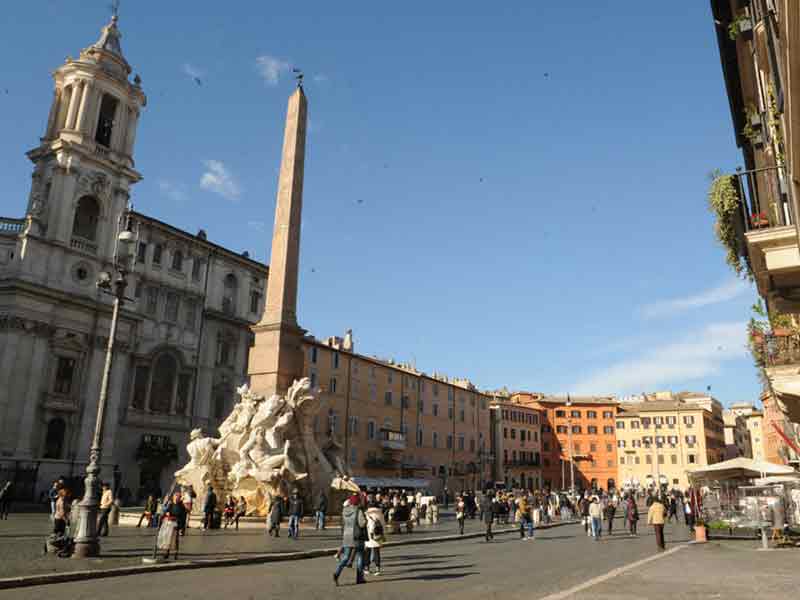 A few steps away is the Basilica of San Clemente, whose archaeological complex is one of the most interesting in Rome for the overlap of buildings and “architectural styles” dating from different periods. Its exterior side hides magnificent artistic treasures dating back to the Middle Ages. From here you can reach the Colosseum, the Flavian Amphitheatre, as well as one of the most famous monuments in the world with its 2,000 years of history carved in stone. The itinerary continues through the Fori Imperiali, which takes its name from the suggestive archaeological area, until it reaches the ancient prison Mamertino, a very important place for Christianity having been the prison where St. Peter and St. Paul were locked before martyrdom. Worth a visit is the nearby Basilica of Santa Maria in Aracoeli, which according to the myth would arise where Augustus had the vision of the Madonna with a child in his arms and heard a voice say “This is the ARA of the Son of God.”

The route continues in the direction of Piazza del Campidoglio on the Capitoline Hill, in the vicinity is one of the most important monuments of the city, the Tabularium, imposing building of late-Republican age on whose remains was then built the Senator Palace, seat of the Roman Senate, formed in 1144, and its symbolic head, the Senatore. Leaving the square you take via del Teatro Marcello, along which you will find the monastery of the Oblate of Santa Francesca Romana, founded in 1433 by Santa Francesca Romana and open to the public only on 9 March each year, on the occasion of the recurrence of the death of the saint, and the majestic Teatro Marcello, perhaps the oldest theater reached to us. Then continue on Via Montanara until Piazza di Campitelli and we find the Church of Santa Maria in Portico in Campitelli, one of the oldest Marian sanctuaries in Rome, where is located, an ancient Marian image, very venerated during periods of pestilence.

The itinerary continues, passing through Via dei Funari, with a visit to the Renaissance Church of Santa Caterina dei Funari in the heart of the Rione Sant’Angelo, in whose interior stands the painting “Santa Margherita” of Annibale Carracci, still placed in the original frame. The next stage is the sacred area of Largo Argentina in the ancient area of Campo Marzio, the most extensive complex of the currently visible Republican age, with the remains of four temples ranging from the 4th century to the 2nd century B.C. Within walking distance of this fascinating area is the Church of the Holy Stigmata of St. Francis, built between 1708 and 1721 by Pope Clement IX and dedicated to the stigmata of the Saint received on the Monte della Verna on September 14, 1224, episode remembered by the statue of St. Francis of Assisi located on the portico of the church, work of Antonio Raggi. From here, continue along Via dei Cestari until you reach the Basilica of Santa Maria ad Martyres, better known as the Pantheon.

From the Pantheon the route continues to the Basilica di Sant’Eustachio in Campo Marzio, which, rebuilt several times, is currently present in its late Baroque version. The origins of the church are linked to a legend according to which a certain Placido, captain of the militias under the Emperor Trajan, converted to Christianity and was renamed Eustachio. A few meters away there is the Church di Sant’Ivo Alla Sapienza, built in the second half of the XVII century by the architect Francesco Borromini. The building, located inside the courtyard of the Palazzo della Sapienza, home to the ancient University of Rome, is considered for its artistic, technical and symbolic values, as one of the masterpieces of Baroque and of the history of architecture in general. The next stop is Piazza Navona, one of the most beautiful and important squares of Rome. Built on the ashes of the Stadio di Domitian and rich in Baroque art, the picturesque square involves Romans and tourists in a magical atmosphere through a touch of bohemian style.

On the western side of Piazza Navona you can admire the Church of Sant’Agnese in Agone, which, according to tradition, rises on the place where the saint was exposed naked to the pillory and was covered by her hair dissolved by prodigy. The current construction was started by Girolamo and Carlo Rainaldi in 1652 under Innocenzo X and was finalized by Francesco Borromini (1653-57). After crossing Piazza Pasquino, the path continues with a visit to the Church of Santa Maria in Vallicella, traditionally called “Chiesa Nuova” (New church). Located in the heart of Baroque Rome, the church was built by the will of San Filippo Neri on the occasion of the Jubilee of the 1575 and it was the meeting point of the pilgrims departing for the “tour of the Seven churches”, the pilgrimage to the seven most ancient and important basilicas of Rome. Then continue to Ponte Sant’Angelo, where the 10 great statues of the angels adorn it, carved in the 1600 under the direction of one of the greatest sculptors and artists of all time, Gian Lorenzo Bernini.

Crossed the bridge you reach the fortress of Castel Sant’Angelo, which takes its name from the statue of the Archangel Michael placed on its top. Built around 123 A.D. as a tomb for the emperor Hadrian and his family, since 1925 is the seat of the National Museum of Castel Sant’Angelo, where extraordinary collections of art and history are preserved as well as memorabilia of the Italian Army. Finally, the journey ends in one of the most famous squares in the world, Piazza San Pietro, for centuries a meeting point for thousands of faithful. On the square stands majestic the Basilica of St. Peter, the largest of the four papal basilicas, to whose realization have participated important artists such as Bramante, Giuliano da San Gallo, Raphael, Michelangelo, Giacomo della Porta, Domenico Fontana, Carlo Maderno and Gian Lorenzo Bernini. Inside it is preserved the sculptural group of the Pietà, created by Michelangelo in 1499.