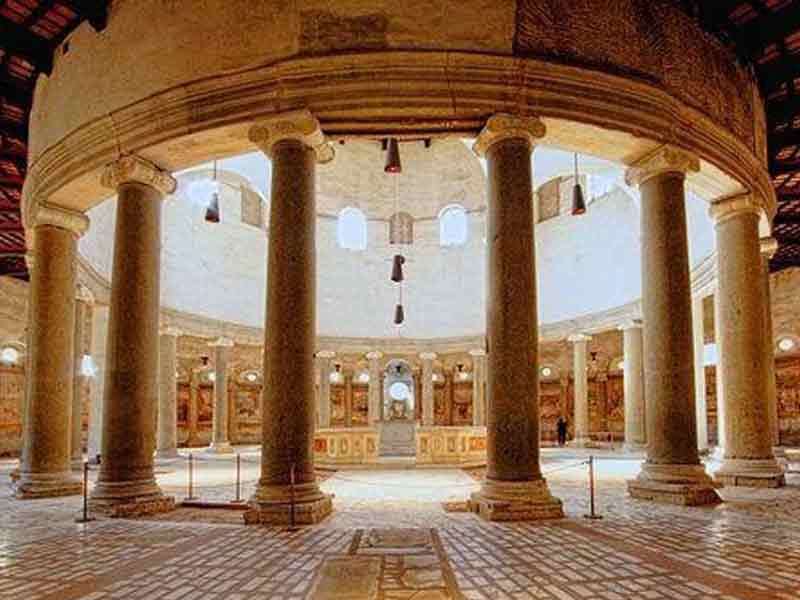 The church of Santo Stefano Rotondo al Celio
About 250 meters from our Bed & Breakfast there is one of the oldest, most fascinating (and lesser known) churches of Rome.
It is one of the very few circular churches in Rome and only for this is worth the visit. Founded by Pope Simplicio between 468 and 483 D. C., in antiquity had a circular plant with three concentric circles, the first of 22 meters in diameter, the second of 42 and the third of 66 (now there are only two)

The architectural beauty of the church is also given by the proportion of the shapes of the circles: in fact the first circle is 22 meters wide, as well as the drum that dominates is 22 meters high and is surrounded by 22 columns

The church at the time was rich in mosaics and marble slabs, but the earthquake of 847 and the sacking of Robert the Guiscardo in the 1084 stripped of many riches he possessed. It remained however a beautiful Byzantine mosaic, still visible, depicts the saints on the sides of a cross.

Pope Innocent II began in 1130 a profound restoration, given the pitiful state in which he poured the church and closed the outermost ring.

Starting from 1582 the walls of the second circle were frescoed by the Pomarancio with 34 scenes depicting torture and supplications that had faced in antiquity the martyred saints: they were a warning to the priests who were leaving on a mission in distant lands in those decades of end 1500, of the possible consequences of their preaching.

In the small apse of the chapel dedicated to the Saints Primo and Feliciano there is a beautiful mosaic of the VII century depicting “Christ with S. Primo and S. Feliciano”: On the golden bottom are represented the two saints dressed with travel cloaks resting on a green grass and numerous flowers. At the center there is a large cross meticulously decorated and adorned with flowers and precious stones with above Christ Beneficente, instead of crucified, recovering an unusual and very ancient iconography.

In the basement of the church were found about thirty years ago the remains of a Roman barracks and a mitreo of the second century A.D., similar to that of the nearby Basilica of San Clemente, a sign that this Asian religion was much followed in those years. The church is from the 1500 is the National church and seat of the Hungarian college.

This area was full of barracks of soldiers and sailors (staff in the positioning of the “Velabrium” (tent) on the Colosseum, but passed by here also 4 aqueducts (Appio, Iulio, Marcia Water and Claudius). In short, it absolutely worths a visit.