Itinerary to discover The Ancient Rome

A series of monuments from the Millenary history…

Rome is a city of millenary history and every corner conceals secrets and fascinating places, some of which are less known but not less interesting. Strolling through its streets you can stumble on interesting and evocative monuments from the very ancient origins. The itinerary guides the tourist to the discovery of some monuments of ancient Rome, some visible also from the outside, others open only by reservation and for groups.

The first stage of our itinerary is the Mausoleum del Monte del Grano in Piazza dei Tribunali, one of the largest burial monuments of antiquity. The monument is known by the name of Monte del Grano since the Middle Ages because of its shape reminiscent of a bushel of overturned wheat. In the sixteenth century a sarcophagus was found here, today preserved in the Capitoline Museums, which would place its construction in the days of the Emperor Alexander Severus (222-235 A.D.). The second stage is the Tomb of the Scipioni Family in Via di Porta San Sebastiano, funerary monument of the Roman age where many exponents of one of the most illustrious families of the Romans were buried, among which are Scipione l’Africano and Scipione Emiliano. Close to it lies the Columbarium of Pomponio Hylas, a Roman columbarium of the 1st century of considerable interest for the outstanding state of preservation.

The itinerary continues with a visit to the monument traditionally known as the Auditorium of Mecenate, although it is actually a Ninfeum, more than an auditorium. The site, visited by reservation, is located in the Esquilino district, along the Via Merulana, and its discovery happened randomly in the 1874. The most striking feature of the building is the pictorial decoration, dating back to the beginning of the 1st century A.D. Continue on Via Mecenate until you reach the remains of the Ludus Magnus in Via di S. Giovanni in Laterano, the largest gladiator school of ancient Rome. It was built by Domitian (81-96 A.D.) and is one of the four barracks (Ludi) built by the emperor, the only one visible but only partially; in fact, more than half of it still lies beneath the ground. 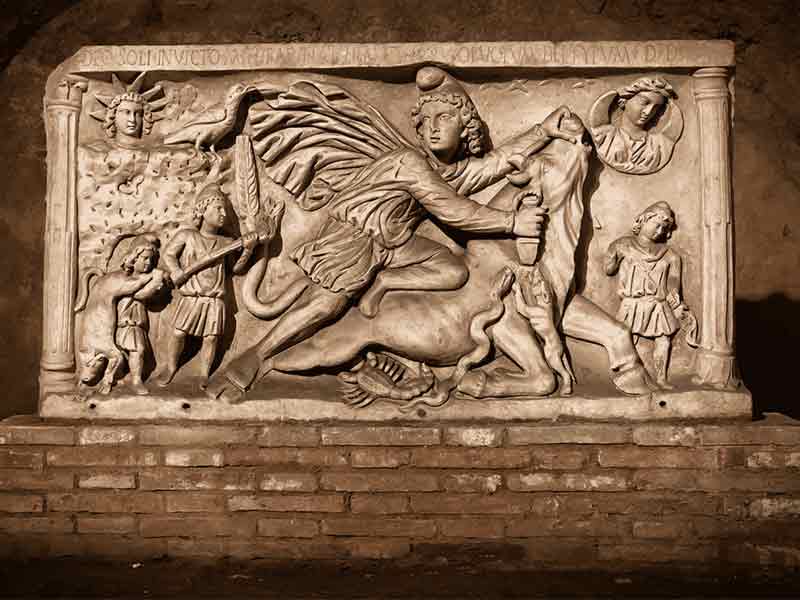 The next stage is the Mitreo of the Ara Maxima of Hercules in the area of the Foro Boario, the plain considered the site of the oldest settlement of the city. Discovered in the 1930s, the Mitreo was built in the 3rd century. A.D. in a building dated to the previous century, of which five rooms are preserved. In one of these environments you can admire a great relief depicting the God Mitra that kills the bull. At this point we proceed in the direction of Piazza Aracoeli, where are visible the remains of a Roman insula dating back to the 2nd century A.D. discovered during the work carried out between 1929 and 1942. It represents a rare and complex testimony of a Roman “house for rent”, the most common form of dwelling in Imperial Rome. Of particular interest is also the insula of St. Paul under the sixteenth century Palazzo Specchi.

Our tour to discover Ancient Rome continues with a visit to the Hypogeum of via Livenza, not far from the Aurelian walls, where there was the large burial site. Of the monument, found in 1923 during the construction of a building, is preserved only a small trapezoidal portion, which alone can give an idea of the splendour and the peculiarity of this place. Finally, the itinerary ends with a visit to the Mausoleum of Lucilio Peto in Via Salaria, also known as the Sepulchre of the Lucilii Family. The monument, dating back to the last years of the 1st century B.C., was discovered in 1887 at about 6 meters of depth compared to the modern street level.