A series of masterpieces absolutely not to be missed

Architect, painter and perhaps the greatest sculptor of the Seventeenth century, Giovan Lorenzo Bernini, better known as Gian Lorenzo Bernini, is considered by all as the greatest protagonist of the Baroque figurative culture. His wonderful works have marked the artistic history of the Roman seventeenth century and from him Rome has acquired the baroque aspect that is still possible to admire walking around the city. Our proposed itinerary guides the tourist between the streets and the squares of Rome on the traces of Bernini, discovering some of his most famous works.

We start from Galleria Borghese, housed inside the Villa Borghese Pinciana, the marvellous villa built for Cardinal Scipione Borghese as a place of representation and as a cultural leisure venue by the architect Flaminio Ponzio in the early seventeenth century. Inside are preserved sculptures, bas-reliefs and ancient mosaics, as well as paintings and sculptures from the XV to the eighteenth century, the result of the collection of the Cardinal. Besides being extraordinary for its magnificent collection of masterpieces, the gallery is perfect in the coherence of its decorative ensemble that implies marbles, inlays, mosaics, stuccoes and inserts of the antique.

At the Galleria Borghese you can admire several works by Bernini, among which stand out: the sculpture Capra Amaltea, which probably represents the oldest attempt by the artist to carry out a work following the style of the sought after Hellenistic beauty; the sculptural group Apollo and Dafne; the Self-portrait painting in the mature age, which is, in all probability, the left half of a double self-portrait with Costanza Bonarelli; the sculptural group Kidnapping of Proserpin, depicting her kidnapping by the hands of Pluto; the Bust of Scipione Borghese, in which they appear already codified the canons of the portrait “in motion”. 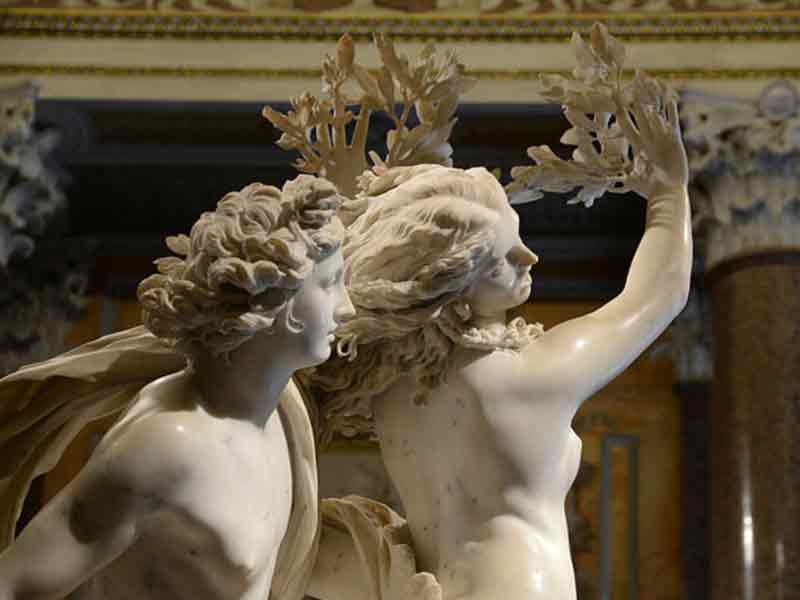 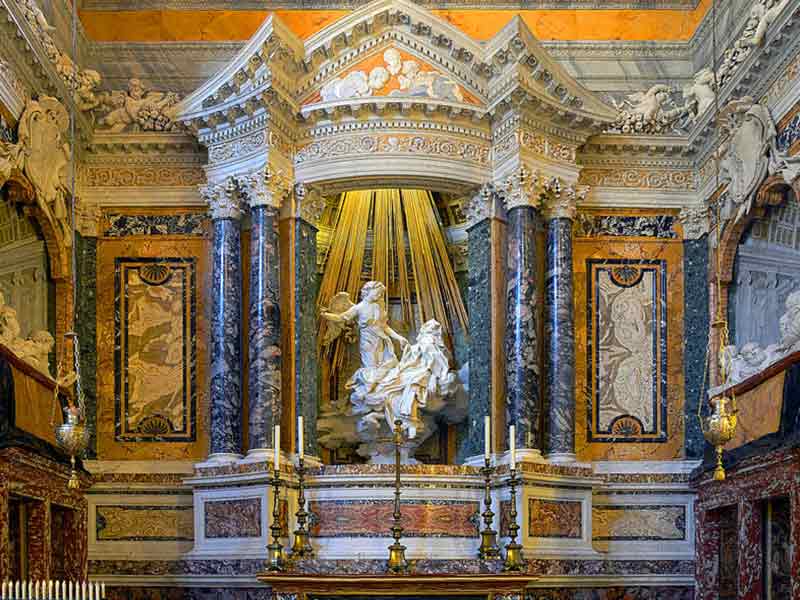 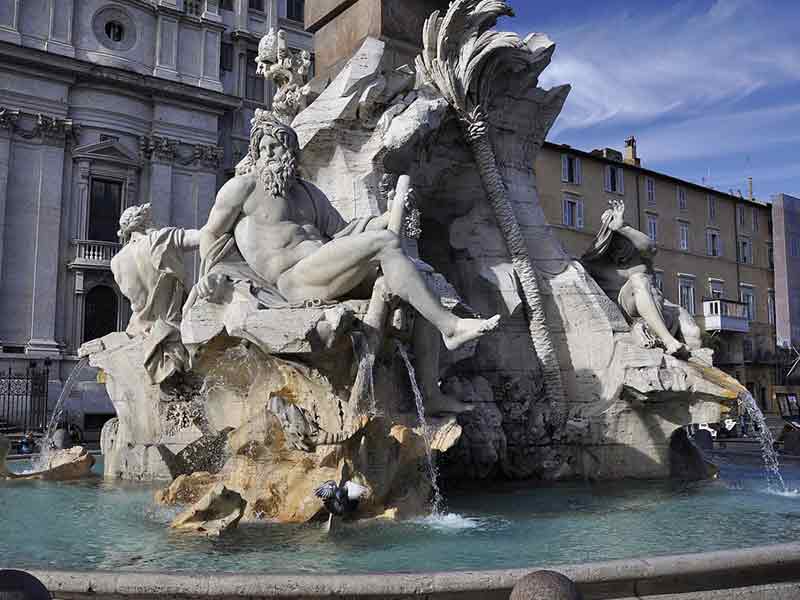 The next stop is the Church of Santa Maria della Vittoria in Via XX Settembre at the corner with Largo Santa Susanna, which offers one of the richest examples of baroque decoration for the richness of marble, stucco and friezes. Inside the Cornaro chapel is a typical example of Bernini “beautiful composition”, a real masterpiece, in particular to the skilful use of mysterious and scenographic effects of concealed light. The main attraction is the spectacular sculptural group with the Ecstasy of Santa Teresa of Ávila, one of the most scenographic works of those realized by Gian Lorenzo Bernini, in which the artist transforms, in a non metaphorical but literal sense, the space of the chapel in theatre.

Continuing along Via del Quirinale, you reach the Church of Sant’Andrea al Quirinale, also known as Sant’Andrea in Monte Cavallo, located in Rione Monti, in front of the long sleeve of the Quirinale Palace. Built between 1658 and 1671 by the will of Pope Alexander VII, it is the first church that Bernini has realized all by itself giving full expression to its fantastic vision of the architectural space. The church is also known as the “Pearl of the Baroque” for the splendid pink marbles placed inside and Bernini himself considered his best work; in fact, he later confessed to the son: “Of this only work of architecture I feel some particular pleasure”.

Our itinerary to discover the works of Bernini in Rome continues in the nearby Piazza Barberini, at the center of which is the spectacular Triton fountain created by the artist in 1642-43. Entirely sculpted in travertine instead of the usual marble, the fountain is an expression of the new Baroque concept of space, the sculptural part includes and completely absorbs the same architectural structure. On the corner of Via Veneto always in Piazza Barberini is the less flashy but equally delicious Fountain of Bees, made in 1644 by Bernini himself. The water falls into a shell-shaped tank, where the heraldic bees of the Barberini family are posing to quench their thirst.

The next stage is the scenic and picturesque Piazza Navona, one of the most beautiful and famous squares of Rome. At the center of it is possible to admire the Fountain of the Rivers, conceived by Gian Lorenzo Bernini and executed, between the 1650 and the 1651, by its pupils, to which you owe the allegories of the rivers: the Rio Della Plata, the Danube, the Nile and the Ganges. Next to this wonderful creation is the Fontana del Moro, the work of Giacomo della Porta completed in January of 1655 with the addition to the center of the mighty sculpture of the Moro designed by Bernini and sculpted by the pupil Giovanni Antonio Mari.