A magnificent imperial residence within walking distance of our B&Bs 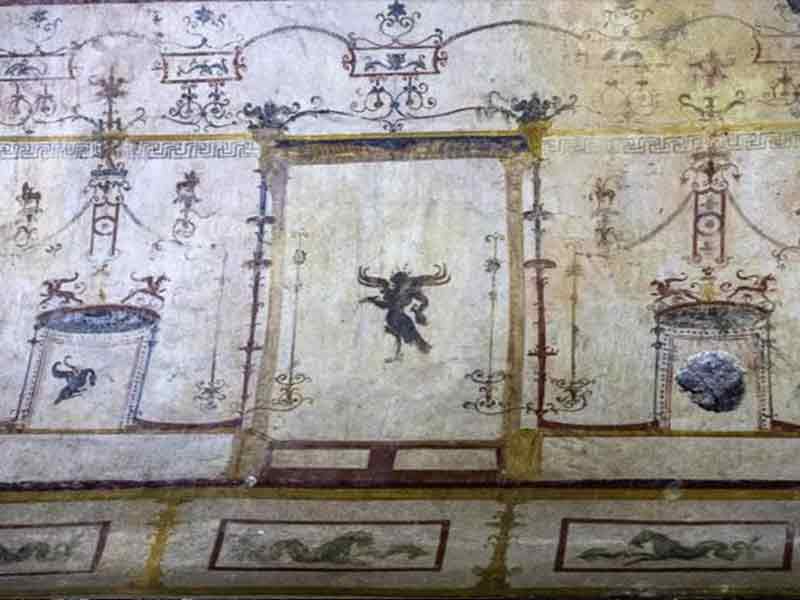 Visiting the Nero Imperial Palace with the virtual reality

200 metres away from our B&Bs Bellezza al Colosseo and Colosseum Tearrace Suite, there is one of the most interesting “hidden” monument of Rome. Hidden because it is underground; but let’s procede with order….
After the terrible fire of 64 A.D., the previous house of Nero that occupied the area of the Esquilino Hill burned entirely and consequently Nerone ordered to build the largest of the imperial dwellings, the “Domus Aurea” (The Golden House).
This series of huge palaces stretched for an area of about 80 hectares and occupied a part of the Palatine, Celio and Esquilino Hills.
They were practically a village, within the imperial city.
Severo e Celere were the architects, who realized the work in just four years.

Suetonius tells us that “a colossal statue high 120 feet (about 40 meters) representing Nerone was placed before the vestibule of the house”; Behind villas with fields, there were vineyards and pastures, forests full of wild and domestic animals, even an artificial lake, many artworks looted in the East. Many walls of the palaces were covered with gold, embellished with gems and shells.

The dining rooms had ceilings covered by perforated ivory slabs, so as to allow during the banquets, which lasted whole days, the fall of flowers and perfumes. The most important banquet hall was circular and revolved continuously, day and night, like the Earth. The bathrooms were powered by seawater to simulate the sea.

When Nero inaugurated the house at the end of the work, he showed satisfaction and said that “finally he began to dwell in a house worthy of a man”.

The palace was partially demolished, using the magnificent marble decorations and precious for other buildings and covered with rubble to make the foundations of new buildings, as it used to do in Roman times.

Vespasian drained the lake and built in his place the Flavian Amphitheatre, which will later be called the Colosseum because of the transfer, before the building, of that “colossus” in gilded bronze, depicting Nero, which had been positioned in front of the vestibule of the “Domus Aurea”.

Tito and Trajan gave the task of erecting huge spas above the palace (the Baths of Tito and Trajan). Paradoxically, the filling with a lot of sand has guaranteed its preservation, since the sand, like the ashes in Pompeii, has preserved part of the magnificent decorations and allowed to understand how the Domus Aurea was made. Of all this huge complex, which had the appearance more than a village rather than a palace, remains only one of the pavilions on the Oppio Hill that was the central one and housed the Octagonal Room.

In the Renaissance, after a boy had fallen by chance in one of the halls, the explorations began on the part of many painters such as Raphael, Pinturicchio, Ghirlandaio, who also left their signatures during these “underground excursions” and described with sketches and paintings the stucco decorations of the vaults of the caves and the frescoes that they first saw after centuries of oblivion. Just because they were in “caves” (Grotte in Italian), this style was called “grotesque”. In recent decades there have been many restorations due to water infiltrations for the presence of the park of the Oppio hill above the Domus. And the restoration was very complex since the whole area is constituted – incredibly – by about 150 rooms, many of them about 10 meters high.

Now you can visit again the part of the Domus Aurea on the Oppio Hill, as has never been seen, through the use of technology of virtual reality accompanied by an audio tale: you will see the decorations of the times of the most important halls as well as even Nero will never have seen them, bringing artificially the light where there is not now because the environments are under ground.

The visit will be possible to groups of 25 people at a time on Saturdays and Sundays, with online reservation