The Basilica and the Monastery of the Santi Quattro Coronati 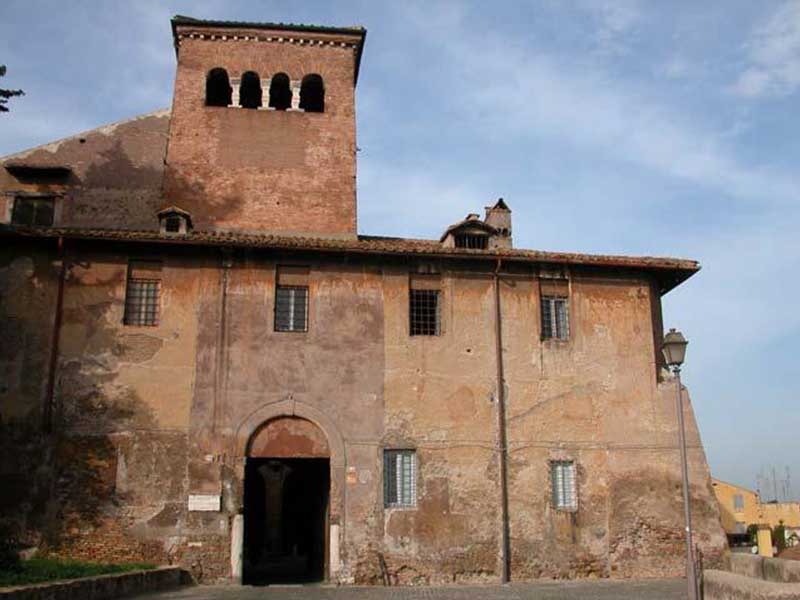 It is a architectonical complex not very well known to the majority of tourists who flock to the most famous Colosseum, Trevi, Vatican, and so on, but not for this less important to understand what was the historical and artistic evolution of Rome in the centuries. Perhaps not everyone knows that the area of the Colosseum in the past centuries, although in ruins, has always been in Rome of strategic importance in the Middle Ages, because it was a point of defense before St. John in Lateran, which at the time was the command center of the papacy. It did not exist yet, in fact, the area of St. Peter as we see it today.

This basilica is, indeed, a very rare example in Rome of “church-fortress”: Inside the historical complex, in fact, we find a bell tower of the 9th century, (the oldest of medieval Rome), the cloistered monastery, a medieval cloister, 3 churches and two classrooms frescoed in Gothic style.

Let’s start with the name: The Four crowned Saints.

Who were they? It is thought that they were 4 stonecutters who were martyred under Diocletian for being refused to sculpt pagan idols or four converted Roman soldiers, who refused to worship a statue of Aesculapius and for this reason they were martyred.

The first historical information tells us that in 500 A.C. this church was built on the remains of a luxurious Roman villa. The church is in fact full of Roman columns and capitals from there recovered; the floor is adorned with beautiful cosmatesque mosaics that are of the later epoch (11th century) and Roman tombstones, as well as the medieval cloister is literally carpeted at the walls with marbles belonging to tombstones, both pagan and Christian, of the 1st and 2nd centuries A.C..

The position of the church was very important already at the time, since it was positioned well at the top and near the Lateran, the seat of the Pope at the time. Around the end of the year 1000 the church is fortified for defensive reasons; after a fire is rebuilt at the end of the 1100; In 1564 they finished other restoration works that led to the foundation of the Monastery of the Augustinian nuns: in 2014 years ago they celebrated the 450 years of their foundation.

This church has several unique stylistic and architectural features, due to its millenary history:

– It is the only church in Rome with the apse embracing all three naves; that is, an apse as large as the outer dimensions of the perimeter walls;

– There are still medieval matrons, that is, the upper loggias of the church, destined to welcome only women, very rare example in Rome.

a) the Chapel of San Silvestro narrates, through the frescoes of the “Donation of Emperor Constantine to the Pope Sylvester” a medieval legend from the strong political value at the time, namely the predominance of the papacy on the emperor;

b) the Gothic Hall, recently opened after a long restorations started after its discovery in 1995, is a wonderful large hall with frescoes in blues and scenes from the twelve months of the year, the four seasons and the virtues. It was originally a room where justice was administered, a sort of court.

– The complex has two very small Romanic churches (one has an octagonal plan that can be visited by the public and the other is not open since inside the cloistered area of the nuns) that are beside the marvellous romanic cloister, full of peace and tranquillity and enriched by the small central fountain.

Of this church are truly splendid the cosmatesque floor, and the cloister.

Especially in the cloister – an oasis of silence and beauty just 500 meters from the Colosseum – you perceive a wonderful sense of meditation and peace that envelops these walls and makes it a real special corner of Rome, absolutely to be visited.